Yes, after many trials and tribulations and unfair press coverage, the Rock Garden is now open and proudly showing off its beautiful new pond. Rock Garden staff mentioned that the project has been the most complex and difficult that they’ve encountered. It was important to mend the leak in the pond: the level was dropping to dangerous levels but the extent of the obstacles that were encountered was unforeseen. ‘Who would have thought that there would be 150 tonnes of silt and many tonnes of rocks to be removed before we could tackle the crack in the pond?’ said a member of park staff. Contrary to a recent press article, the pond was emptied and repaired at the right time of year: the bottom of the pond needed to be dry and reasonably warm for the fibreglass filling to be effective.

Rock Garden gardener Andy Jeavons has worked hard to create a lovely area. The pond frontage has been cleared so that both pond and cascade can be enjoyed from the road and the main park. New raised beds have been built and planted around the edges of the pond and underwater planters created and planted with water plants. For instance, 10 water lilies – two each of pink, 1   white, apricot, yellow and red and all different varieties. There’s also water forget-me-not, marsh marigold, American skunk cabbage, 5 varieties of iris, lobelia cardinalis, pickerel weed, bog arum and ligularia, plus water hawthorn and bog bean.

The cascades were full of tadpoles and other wildlife so when the cascades were switched on the wildlife was washed into the pond and will hopefully thrive. The fish will be introduced back to the pond in stages. A really good bird hide at the top of the garden has now been completed, so bird-lovers will be able to ‘spot’ more effectively. There will be an official opening in the near future to celebrate the achievement. 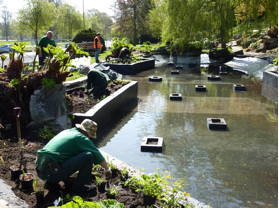 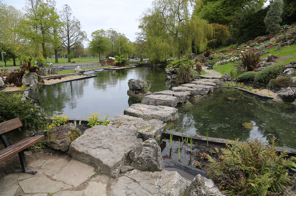 You can see the cascade just reaching the pond after having been switched on for the first time since the repair work began. The blue plastic sheet is to help all the tadpoles reach the pond safely.