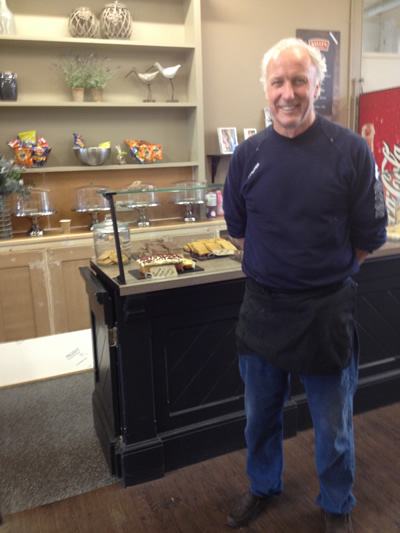 Andy is joint proprietor, with his wife Judy, of the Chalet Cafe in the middle of the park. He’s held the position for 29 years.

What do you enjoy about the job?
I really enjoy the social side and having the chance to meet everyone. I see mums come in with their children – and before you know it, they’re teenagers! The other day a 22-year-old man came in and said ‘do you remember me? I was the baby in the photo taken just here’. I’ve seen the actor Richard Hawley’s children grow up. The twins are at uni now I think. It’s a wonderful park and I have a wonderful outlook on to it; I’m glad I’m not staring at four walls in an office somewhere.

I understand you played for the Albion. How did that come about?
I was a young lad of 19 and playing for Norwich. I played four games in the Premier League (what was then called the First Division) for them when Brian Clough turned up wanting to sign three players – including me. I said I’d have to ask my Dad but he said ‘you’re 19 now, a grown man, you’re able to make your own decisions’.

He was very persuasive and so, within an hour of first meeting him, I’d signed for Brighton. He said ‘you’re going to be my next Roy McFarland’. With that statement ringing in my ears I joined Brighton and Hove Albion and played as a central defender from 1974 to 1980.

What change would you like to see in the park?
I would love to see a park police officer in the park – we had them in 1974. The officer would be a little presence in the park to deter people from doing things they shouldn’t be doing. They develop a good liaison with the public. The park police used to be stationed in the room above us here, so if anyone had a question or concern we could say knock on the door – if they aren’t in they’ll be patrolling the park. I would love to see more planting and a bit more colour in the park, although I understand there are constraints at the moment.

What do you like about the park?
I love the way the park is used now. There’s so much sport going on and exercise – and enjoyment.