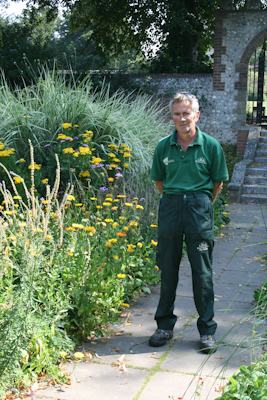 George is Gardens Manager for the grounds of Preston Manor; that’s the area to the north of the north park road including the churchyard, walled garden, wildlife area and beds. He helps out in the rest of the park as and when needed; for instance, he’ll be helping in the Rose Garden soon.

George has had the role for 11 years before which he was at the Kipling Gardens in Rottingdean and he was also foreman at the Royal Pavilion Gardens.

What do you like about the job?
Just about everything – there’s nothing to dislike!

What contribution do you make to the park?
I’ve seen a lot of changes. I suppose the obvious thing is the Walled Garden. When I arrived in the job contractors were laying foundations [the gardens were being rejuvenated following the award of a grant] so the garden was started from scratch. I didn’t design it but I double-dug the lot and planted it up with the help of the volunteers.

And your ambitions for the park?
One day I’d like to see one big team operating together so that we can all muck in together and sort out all the areas of the park.

Things have taken an upward turn since the Friends of Preston Park got going; there are more new ideas coming in for the park.

2 Replies to “A profile of George Harris”