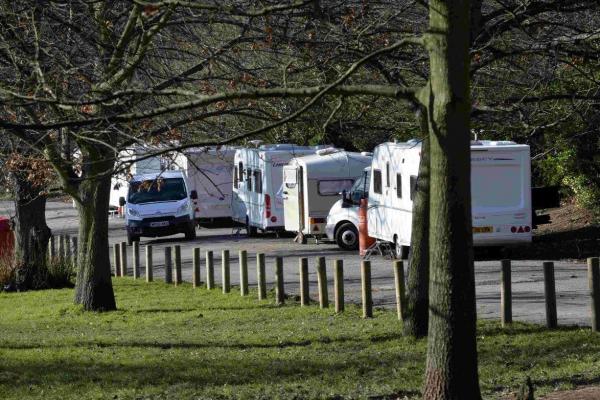 A few days ago a couple of committee members met with Caroline Lucas to discuss the problem of Travellers in the park. We agreed that it’s impractical to prevent incursions into the park but we asked for her help with a few things we felt may act as a deterrent:

Caroline was sympathetic during the meeting and here is her formal reply:

As discussed when we spoke, I am, and will be following up on a number of the concerns that you raised regarding the unauthorised Gypsy and Traveller encampments in Preston Park – which appear to have become much more frequent over the last year or so.

I’m aware that since we spoke a further unauthorised encampment arrived at the park, and I have contacted Brighton and Hove City Council, as outlined in the email I sent you on Thursday, about events taking place at the park over the weekend and eviction plans.

Referring to the email you sent me on Sunday, in which you offer to be a conduit between park users and myself, I’m happy with whatever works best. Please do feel free to circulate this email to anybody that you think would be interested to know my position on this issue, but park users would also be very welcome to get in touch with me directly too – especially if there are specific concerns that they would like to raise.

As this email might be forwarded on to others, I think it’s important to make clear that in my role as MP I don’t have any direct say in decisions that fall within the remit of the local Council. However, I am very happy to make representations on behalf of my constituents, and would like offer assurances that whenever I am contacted with specific complaints, about eg antisocial behaviour or dangerous driving, I raise them with the relevant authority, be it the Council or the police, and urge swift action. I have had a number of meetings with the police and discussed ways to increase the number of prosecutions for things such as fly tipping and intimidating behaviour. As discussed when we spoke, I have now contacted Sussex Police to see whether it would be possible to arrange a meeting with them, and Friends of Preston Park, to discuss specific concerns. As soon as I hear further on that I will get in touch to let you know.

I have also asked the Council for more information about the way in which it issues, and pursues, parking fines in the park. I think it’s only fair that tickets issued to both the settled and traveller communities are handled in the same way – and I know that you have concerns that this is not the case. I hope to be able to get back to you with more information on this shortly.

As you might already be aware, under the current law, the police can apply for an order to move on Travellers and Gypsies if certain conditions are met, securing evictions can also be dependent on having an alternative site to which to direct travellers. This is required under a Section 62 eviction, one of the main options available to the police and your local council in Brighton and Hove. So one thing that would make a considerable difference to the ability to tackle unauthorised encampments is the provision of a temporary site for travellers to move to. By creating a permanent site, which the council is proposing, it will free up space on the temporary site at Horsdean, and then police can invoke the relevant section of the law ie Section 62. In short – the approach is very much about taking action and creating the conditions for a zero tolerance approach to unauthorised encampments. However, I believe that we also need a national strategy that requires local authorities to provide for traveller populations, otherwise places like Brighton and Hove have to bear more than their fair share of responsibility – and that is not fair on residents.

Brighton and Hove has been visited by Travellers and Gypsies year on year for a very long time – it is hoped that provision of the permanent site will improve the situation, not least because it creates more opportunities to move on unauthorised encampments from places like the city parks. It’s important to balance the rights of permanent residents and the Gypsy and Traveller community visiting our city. Due to the historical failure to prevent unauthorised encampments in the city I am persuaded that a permanent site, allowing the transit site to be freed up so that unauthorised encampments can be directed there using police powers, is the best way forward and will result in a marked improvement that no other strategies have delivered. I will also be making enquiries with the Council about enforcement/options whilst work takes place at Horsdean over the coming months.

I hope to be able to get back to you shortly with the responses I receive. I’m aware that you sent a further email on Sunday, asking for assurances from the Leader of the Council regarding the collection of parking fines. I will therefore flag your email on to Councillor Jason Kitcat, and let you know when I hear back from him.

Thank you for taking the time to come along to my surgery and discuss this issue. I take on board your concerns that Preston Park is a special park, and should be considered as such. It’s my local park too, and I’m happy to support the Friends of Preston Park where possible on this issue. You might also be interested to see my letter in the Argus on this issue:http://www.theargus.co.uk/opinion/letters/11280485.Using_issue_as_a____political_football___/.