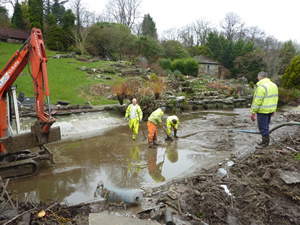 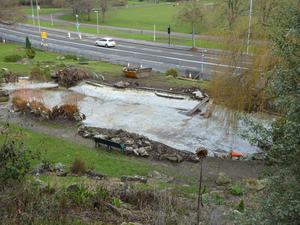 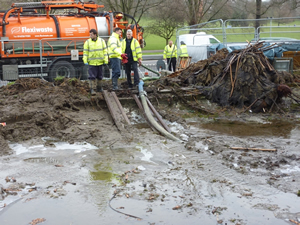 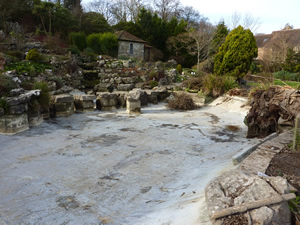 You may have seen the article in the Argus and the item on BBC TV regional news about the problem with the fish in the Rock Garden. Apparently the storage of the fish during the renovation works didn’t go according to plan. We asked the council for their comment about this and received this reply:

‘The pond started leaking at such an alarming rate that we decided that we couldn’t wait for funding to be found, and we didn’t want the fish to suffer, so I got funding from elsewhere and got this project under way. A lot of thought was put in to the programme, with the fish’s welfare the top priority.

The pond was electro-fished by a specialist aquatics company (Mayfly Aquacare of Lewes), on Tuesday 15th January. The fish were put in to three insulated and lined skips which were filled with water from the pond. We decided that by keeping them on site, it would be less stressful for the fish. Skips were used as they are totally vandal proof, and we didn’t want to find that someone had slashed a plastic pool, which was part of our original thinking. They were fenced off and covered over to prevent people throwing things in.

Aeration was considered, but after assessing the risk of having a live cable running to water and having evidence of people getting in to the site, even though we put security fencing all along the front of the garden for safety reasons, I decided against this.
Everything was fine, until the freezing spell of weather arrived. This meant that we couldn’t refresh the water in the skips, as the overflow of water would have gone on to the pavement and cycle lane, causing a real hazard. On Monday 28th January, I had a phone call from the RSPCA who were on site. I postponed a meeting I was just about to go in to, and met them. They had discovered that some fish had died. We don’t know exactly why and nor did they. There could have been several reasons. Because all was well when they were last inspected on Thursday 24th January, and we were all busy with the contractors, we didn’t get around to checking them on Monday which is why the RSPCA discovered them.

The RSPCA took the dead fish away, (no more than 30), and they gave me until mid day on Wednesday 30th January to get the fish in to other accommodation. I arranged this immediately, and by the deadline, all the fish, (hundreds of them), had been taken away by Mayfly Aquacare, where they are getting the best possible care. I’ve since been told that they are doing very well.

Hindsight is a wonderful thing, and we sincerely regret losing any fish, but I can assure you that we did everything with the welfare of the fish paramount at all times.’

Our thanks to the council for this statement.

Because of the bad weather and the extent of the crack in the pond it looks like the Rock Garden will be closed for longer than was anticipated. We’ll keep you posted.