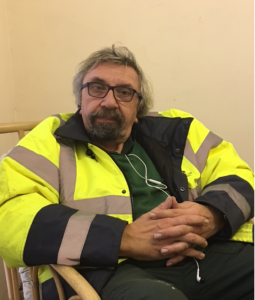 Bill is a long-standing member of Preston Park staff. Here’s his story:

How well do you know the Preston area?

Well, I can trace my family here to around the 16th century. I’ve always lived here and played in the park as a child. I loved the playground and rode around with my friends on the cycle track. I remember the park policeman – we weren’t allowed in the shrubbery let alone set foot on the bowling green. We respected the police, and they knew all of us children. My uncle worked in Withdean Park and knew the gardeners of Preston Park.

So when did you join as a member of park staff?

I like the variety. The different areas of the park, for instance the Rose Garden, the bedding, the sports and the estates work; that is, working in places like Hollingdean and Patcham housing estates. I reckon I spend about 50% of my time in Preston Park.

I don’t like the way the park looks run down. Nor do I like the way that some people fail to respect the park, for instance allowing children or dogs to run through the roses. A lot of roses have been destroyed that way. What would you like to see for the future of the park? I would love to see the flowerbeds along the road reinstated. We used to have such nice comments about them. If there was the money, I’d like to see the park how it was in its heyday – around 1910-1920: fenced and looking more stately. People would again take pride in their park. If I had a Lottery win I would like to think I’d put money towards realising that.