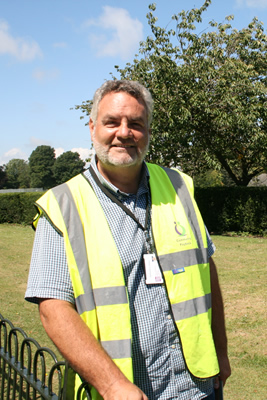 Peter is Community Pay-back Supervisor, which involves organising work for groups of up to eight offenders at a time. He often works in Preston Park on Fridays in areas like the cycle velodrome and the Rock Garden as well as the main park.

What do you like about the job?
The variety. I work in a variety of locations and we undertake a variety of work. I work with people from a range of different backgrounds – it can sometimes be challenging.

What contributions have you made to the park?
Well, in about 18 months we’ve painted all the railings, taken the suckers off around 20 elm trees, swept and litter-picked various areas including the velodrome and the parking roads, as well as things like collecting flints from the walls in the velodrome so they can be re-used. The team has cleared the waterfall in the Rock Garden of debris so that it can begin to work again and we’ve done weeding and coppicing.

Best thing about the park?
It’s used so widely by so many different people. Other parks don’t have the same usage that Preston Park has.

Ambitions for the park?
I think the maintenance of the Rock Garden is very important. It is a stunning entrance to the city and contains some important plants.