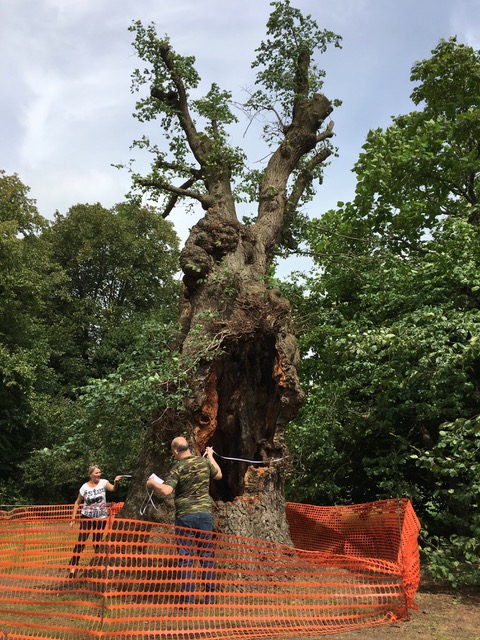 How would you describe what you do?

I’m volunteer curator for the national elm collection [which is in Brighton and Hove].

How long have you been doing that?

Since it started when I helped put it together in 1997.

Why is Preston Park significant?

Because it’s got champion elms as well as a wide range of varieties: it’s a living museum! And the park is the core of the city – a lot of documented history is here.

Which are the rarest elms?

There are numbered ‘clones’ – from Holland originally (the ones in Holland are long gone): 2 in the park which are named ulnus 297 and ulnus minor 28, they are the largest of their type and very rare. And there’s a Den Haag elm – also the largest of its type – at the top of the Coronation Garden.

How many different sorts of elm are there in the park?

About 30 different types. I have a full list and their names. As a matter of interest, Brighton and Hove has the only still-growing population of elms in the south of Britain. There are around 40,000 elms in the city – their population has doubled over the last 30-40 years.

What would you like to see in Preston Park in the future?

I’d like to see the gaps in the line of Wheatley elms [along the side of the wildflower beds and the petanque area] re-planted with elms, maybe a ‘New Horizon’ variety which has a degree of disease resistance.

What made you passionate about trees in the first place?

My dad started me off when I was about 5 – he showed me what a beech tree was . . . And noticing all the elms dying off – especially in the churchyard at my sister’s wedding – I was about 7 years old.

Will you do another tree walk in the park for us soon Peter?

Peter tells us that the damaged tree now measures 633cm around its trunk – the other twin measures 665cm. The trees, although they’re thought to be the oldest English elms, are not the biggest – that prize goes to an English elm in Australia which measures approx 925cm around its trunk and is 44 metres tall – about 140 ft. ‘Our’ Twins are about the fifth biggest.

We’ll let you know as soon as the tree walk is arranged.